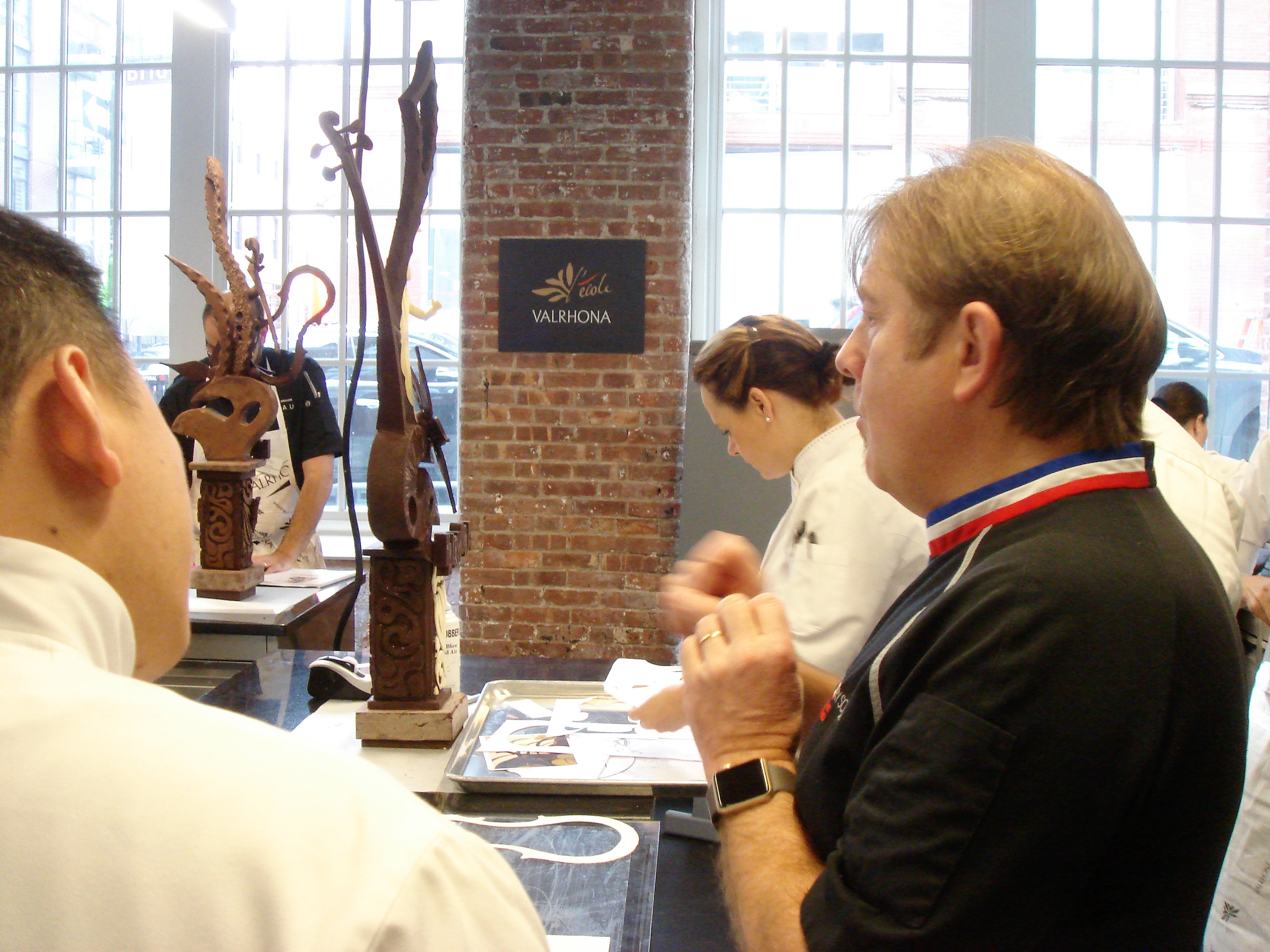 Take a Look Behind the Scenes: Chocolate Haute Couture In the Making

A breathtaking view of Manhattan at the foot of the Brooklyn Bridge, followed by a brisk 3 min walk from the East River side and I’m inside Valrhona’s first U.S. chocolate school outpost in Brooklyn, NY. Today the legendary Chef Stephane Treand, Meilleur Ouvrier de France recipient–the highest honor given by the President of France to craftsmen–is giving “Artistic Chocolate Showpieces” class to a group of skilled pastry chefs. 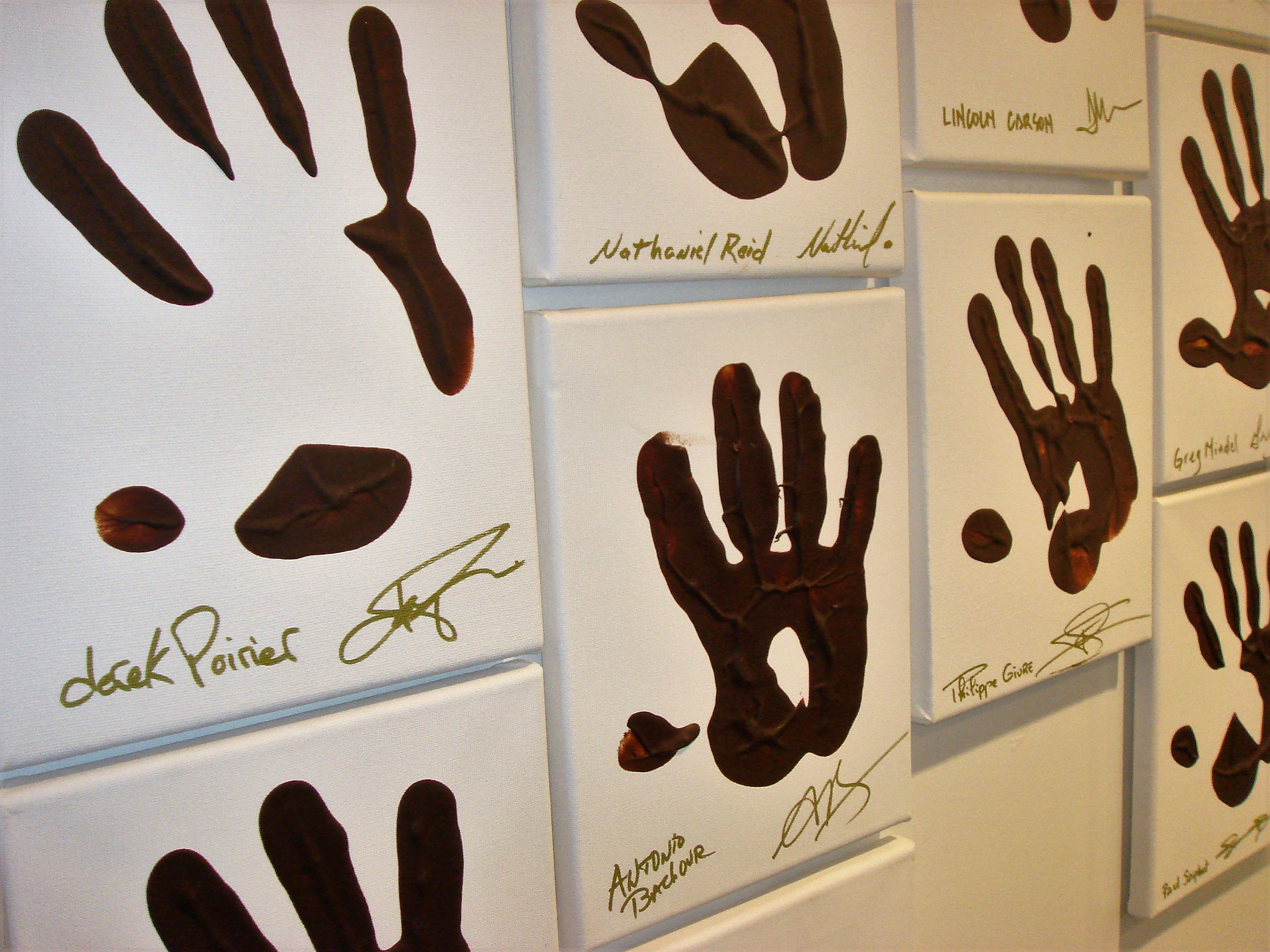 Chef Stephane, how long does it take to cover the basics of creating a showpiece, say, three feet high?

It takes at least three full days. Yes, because we have to cover all the basics and many techniques. We’re also processing a lot of chocolate at the beginning–it’s a lot of churning, shaping, molding the parts, assembling them all together, etc. and chocolate takes time because you have to clean it at every step. It’s easy to be very messy with chocolate. I want these talented chefs to figure out how they’re gonna do the showpiece and sketch a little bit. I give them direction from the beginning, but I also want them to have some freedom. That’s why you see all their showpieces don’t look exactly the same. They’re similar, but not the same. Actually we’ve saved some time because I brought some silicone molds, otherwise it would’ve taken even longer. Besides it’s not a race, the chefs have to have some time to practice new techniques. 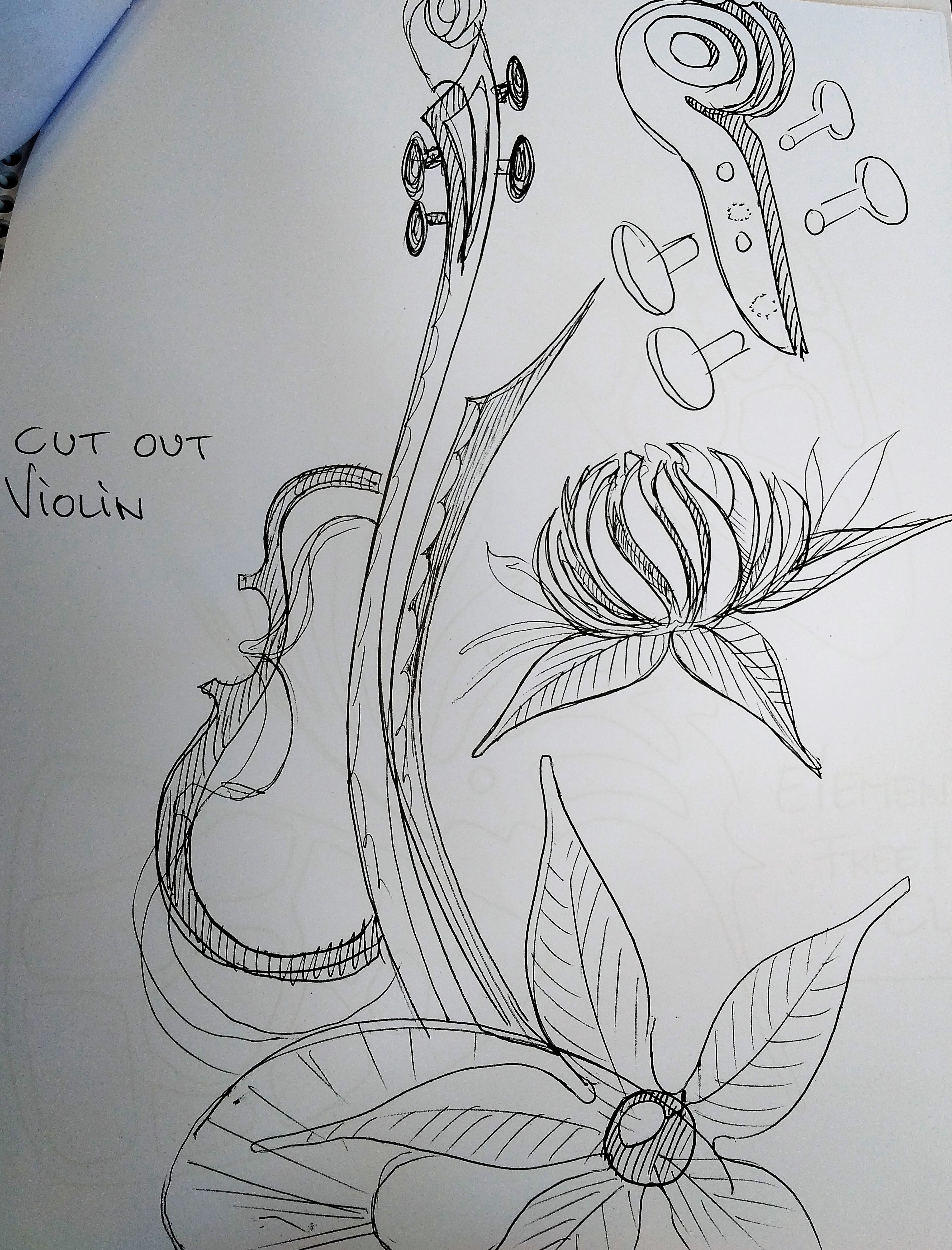 Elements of the future showpiece sketch.

From your experience, what would you say is the most challenging for chefs in terms of artistic aspect of showpiece creation?

I think it’s to work clean and to get an eye, to see something nice to design. You need to have an eye. You know for myself, I never did a specific school training for that, but I like to draw, I draw a lot and it helped me to “see”. Let’s say, you have only three or four elements and you need to see how to place them, maximize them the best, use their characteristics to the fullest in order to create something beautiful. Not everyone’s got it at the beginning and you need to learn and try things. I think for most chefs this is the hardest part–placing the elements, to really get a hundred percent out, create something really nice from the design perspective. It’s a question of balance, volume of the showpiece, working clean at the same time, mix of different textures because in the end it needs to be beautiful to anybody who looks at it.

How do you achieve these different chocolate textures? 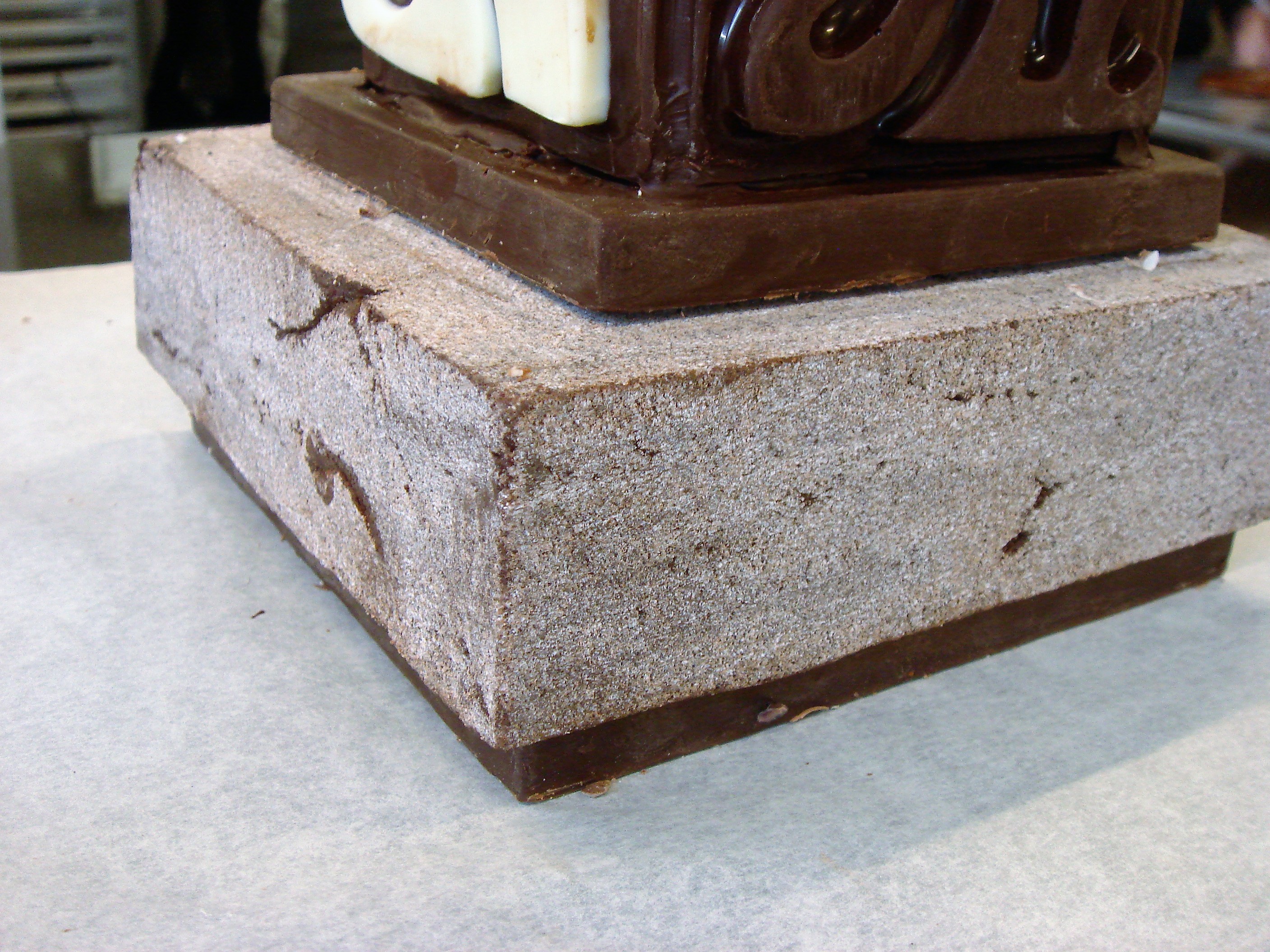 The base of the future showpiece is created by mixing 50/50 chocolate and sugar. 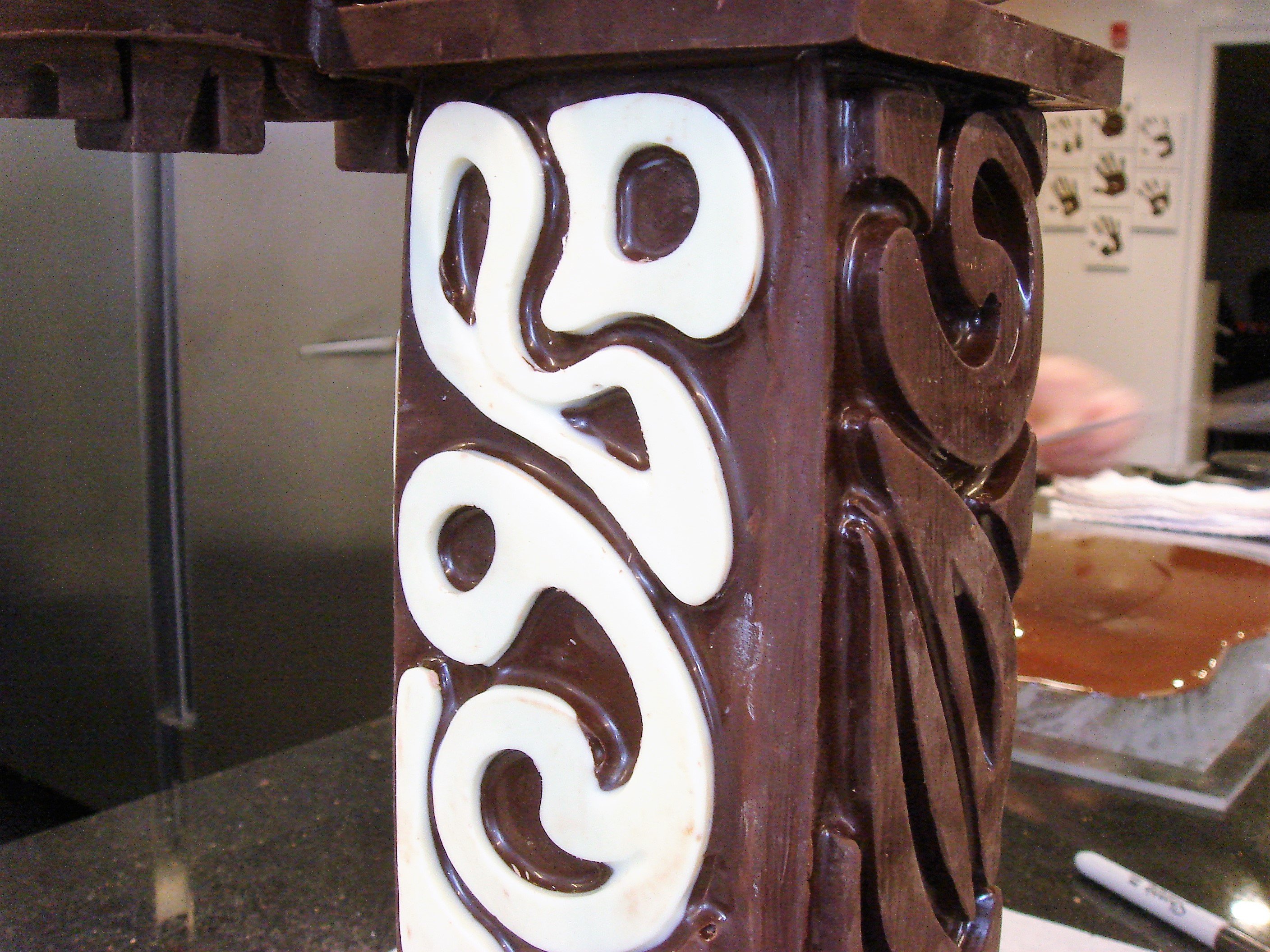 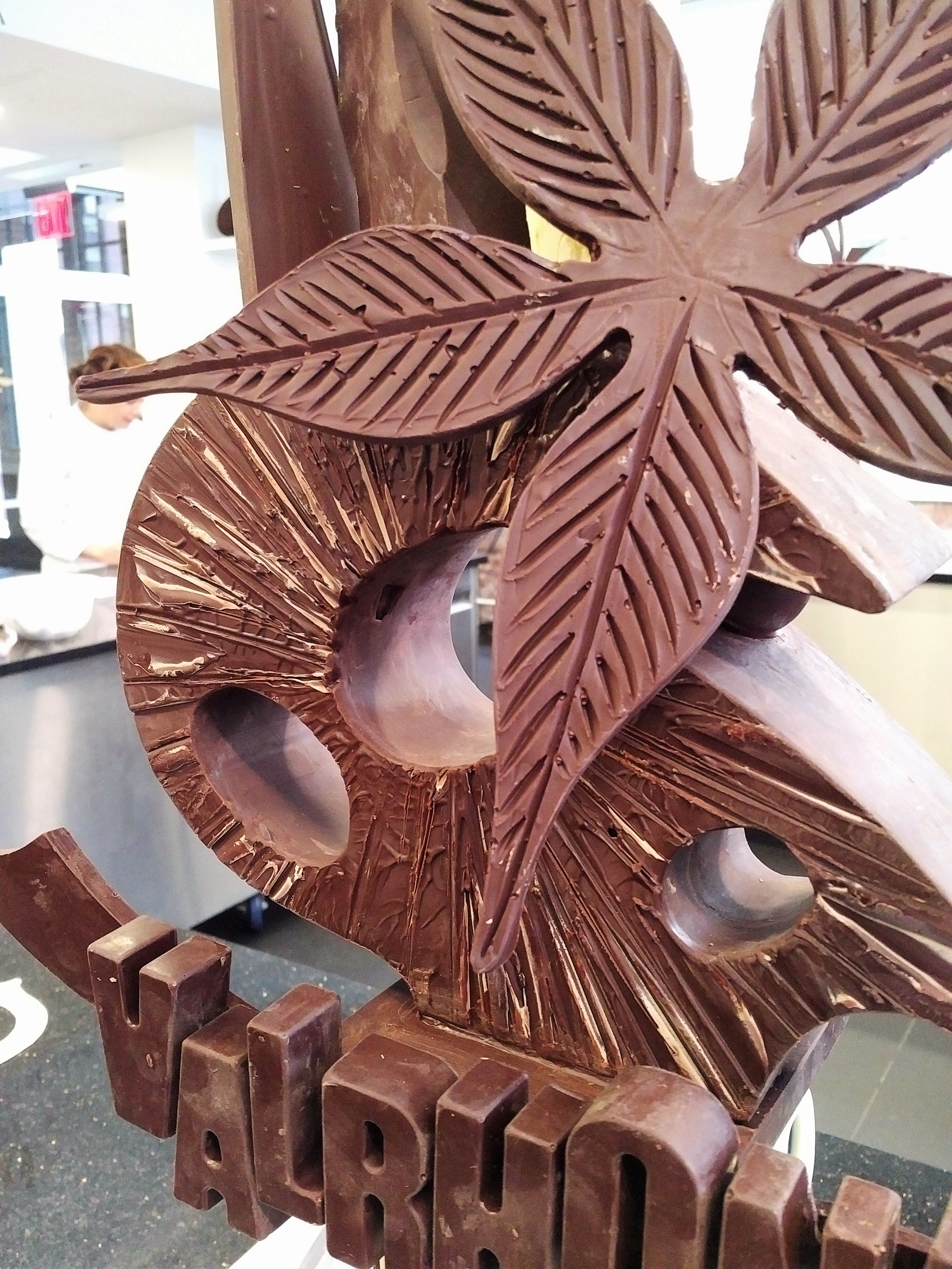 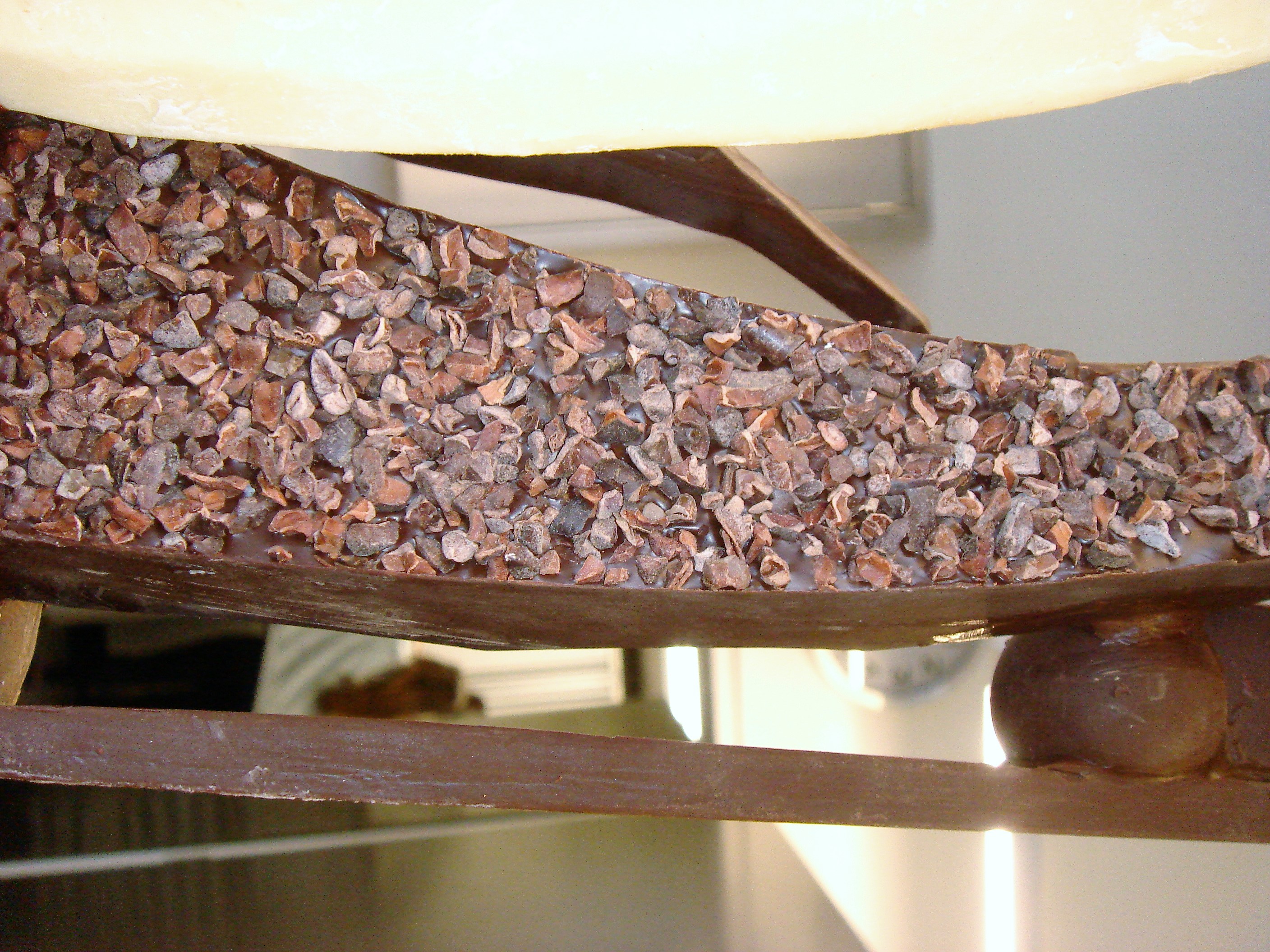 Are there any structural elements inside the showpiece, like metal or plastic base, pipes?

No! Everything you see is a pure chocolate, there is nothing inside but chocolate. That’s another reason why it takes this much time to create one showpiece, because when we clean chocolate elements we do it with our fingers or paper and it’s very easy to break the element. Chocolate is very fragile. 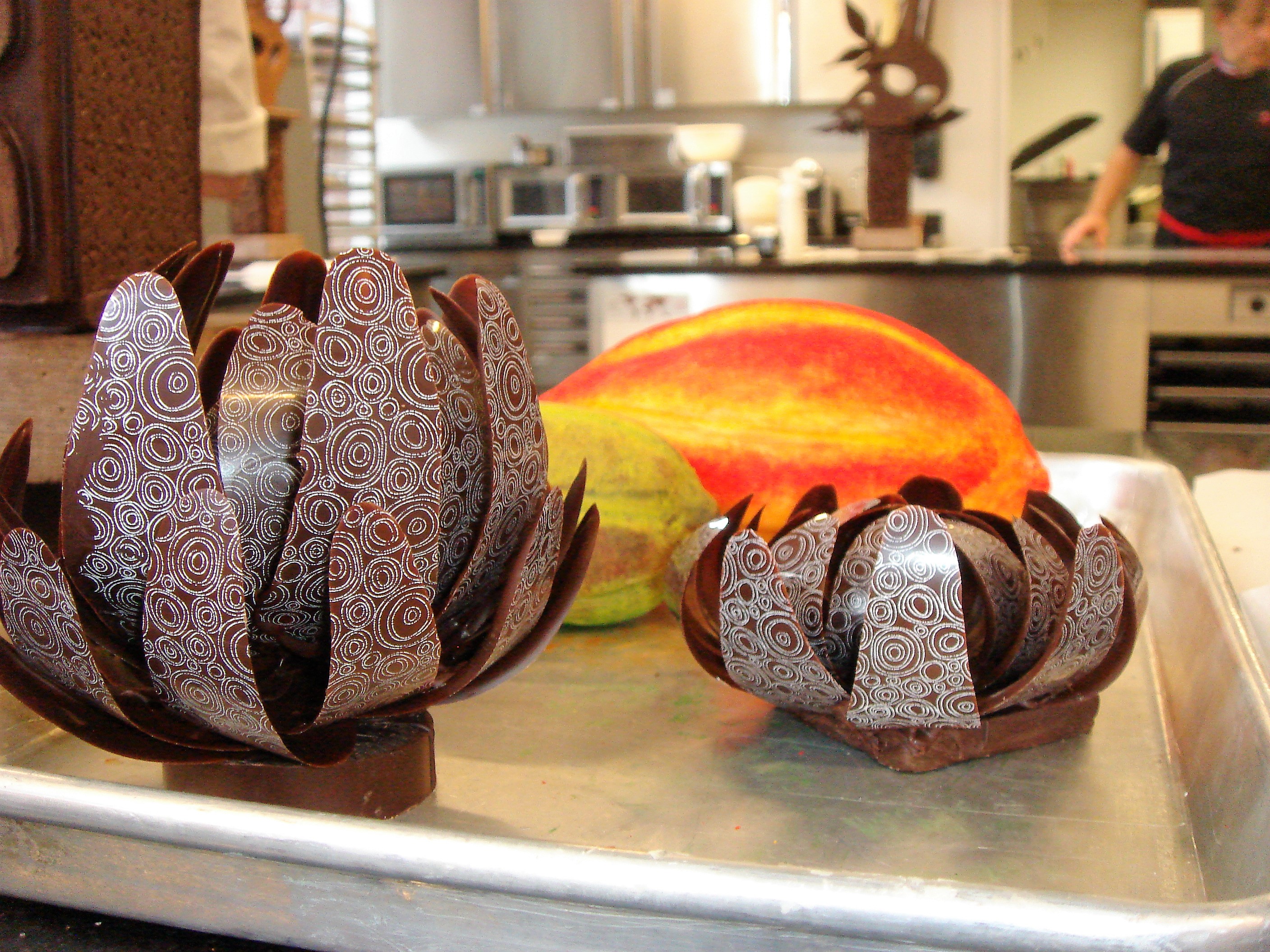 What happens to this beauty next; it took several days to make it, what its lifespan is going to be like?

These will be used for display. Normally these created for particular expo, show or competition. It could easily be displayed for three-five years, but the problem would be the dust, and it’s risky to dust it of. So we try to display them for a few weeks, a couple of month maybe, and then we break it and melt chocolate to create new pieces. Though there are some elements here at Valrhona that I did last year, they’re still here, almost a year later. 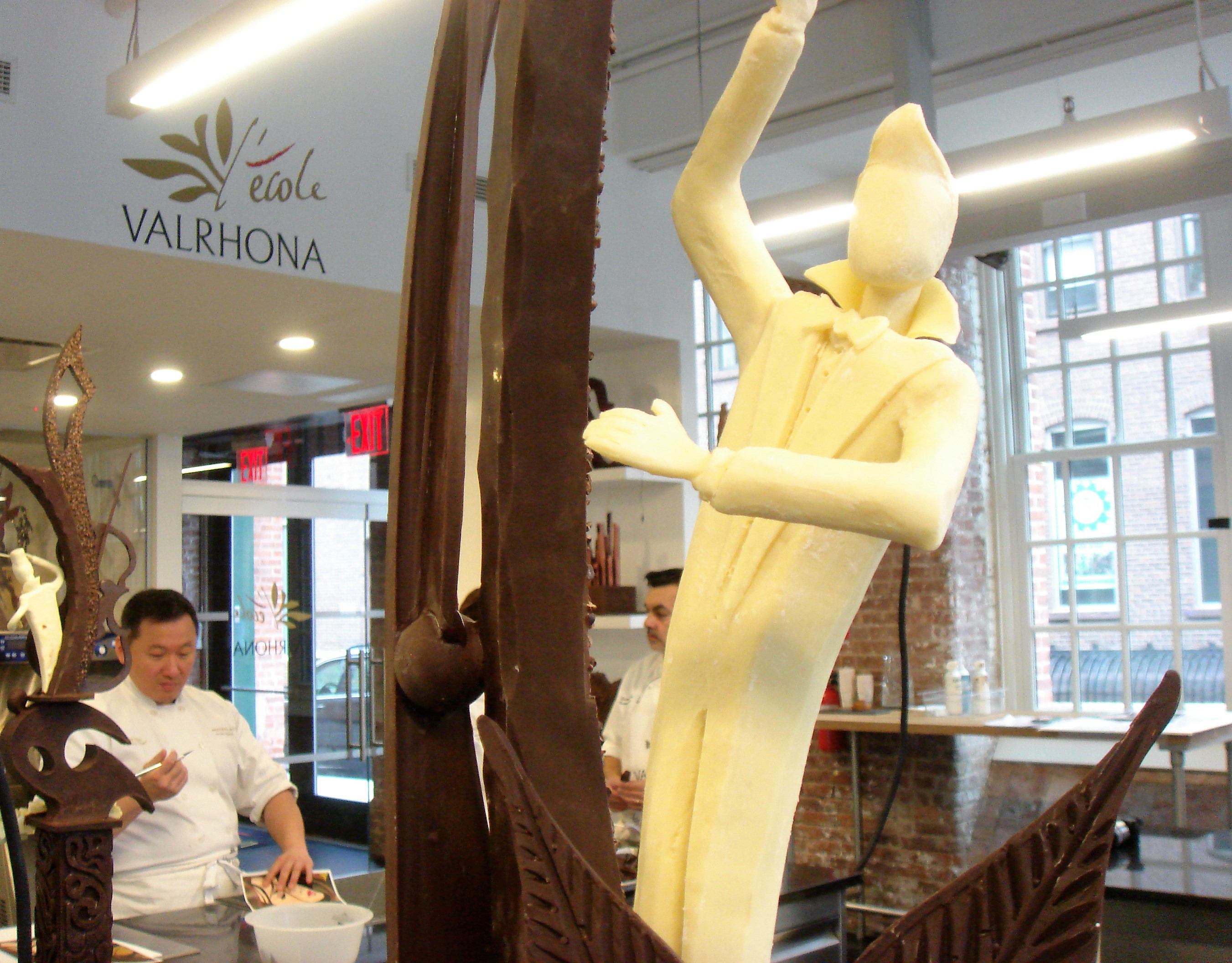 What was the most challenging showpiece you’ve created to date?

During the competitions, when we have to do big showpiece, like six-seven feet high. Yeah!

Remarkable! How do you assemble these, do you have to use some ladder?

Yes, you have to jump on a ladder for that, to put last elements, the top of the showpiece. So yeah, Home Depot is the favorite store of a pastry chef (laughing). But truly, it’s amazing what you can do with chocolate. Today we’re going to airbrush the showpieces to bring in color, we use cocoa butter and add food coloring to it. In the end, only a few people will believe it’s made out of chocolate. People don’t believe the showpiece is made of chocolate because it looks like something else. 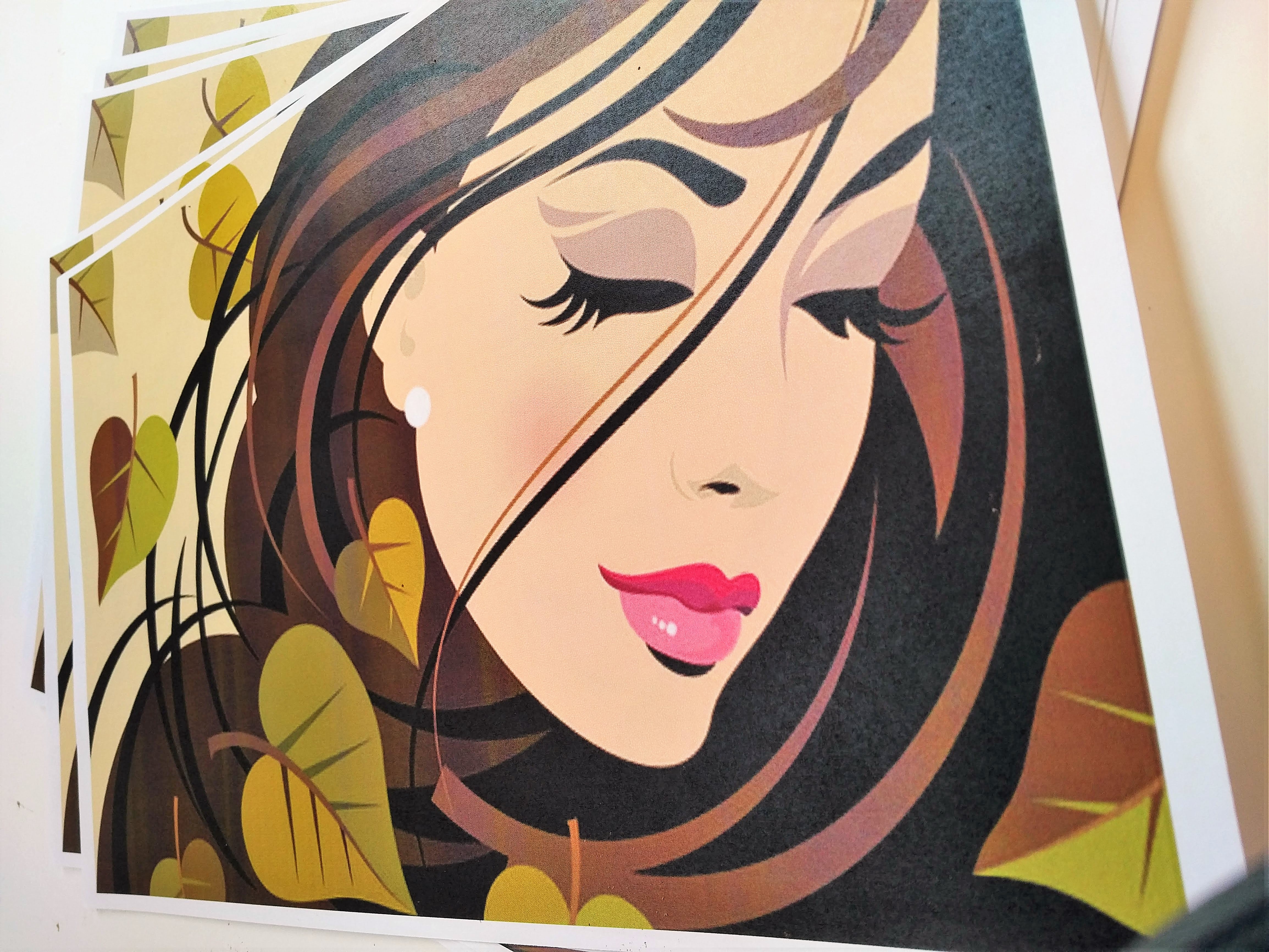 Drawing for one of the showpiece’s elements.

What are the most common mistakes people make while learning the art of chocolate showpiece creation?

I want to say when some people work on creating the showpiece they treat it like a type of job and they want to do it too fast. They want to finish before starting. I always emphasize that you have to take your time to do it. It’s very rare that one can create a perfect element by doing it just once; you should do it again. 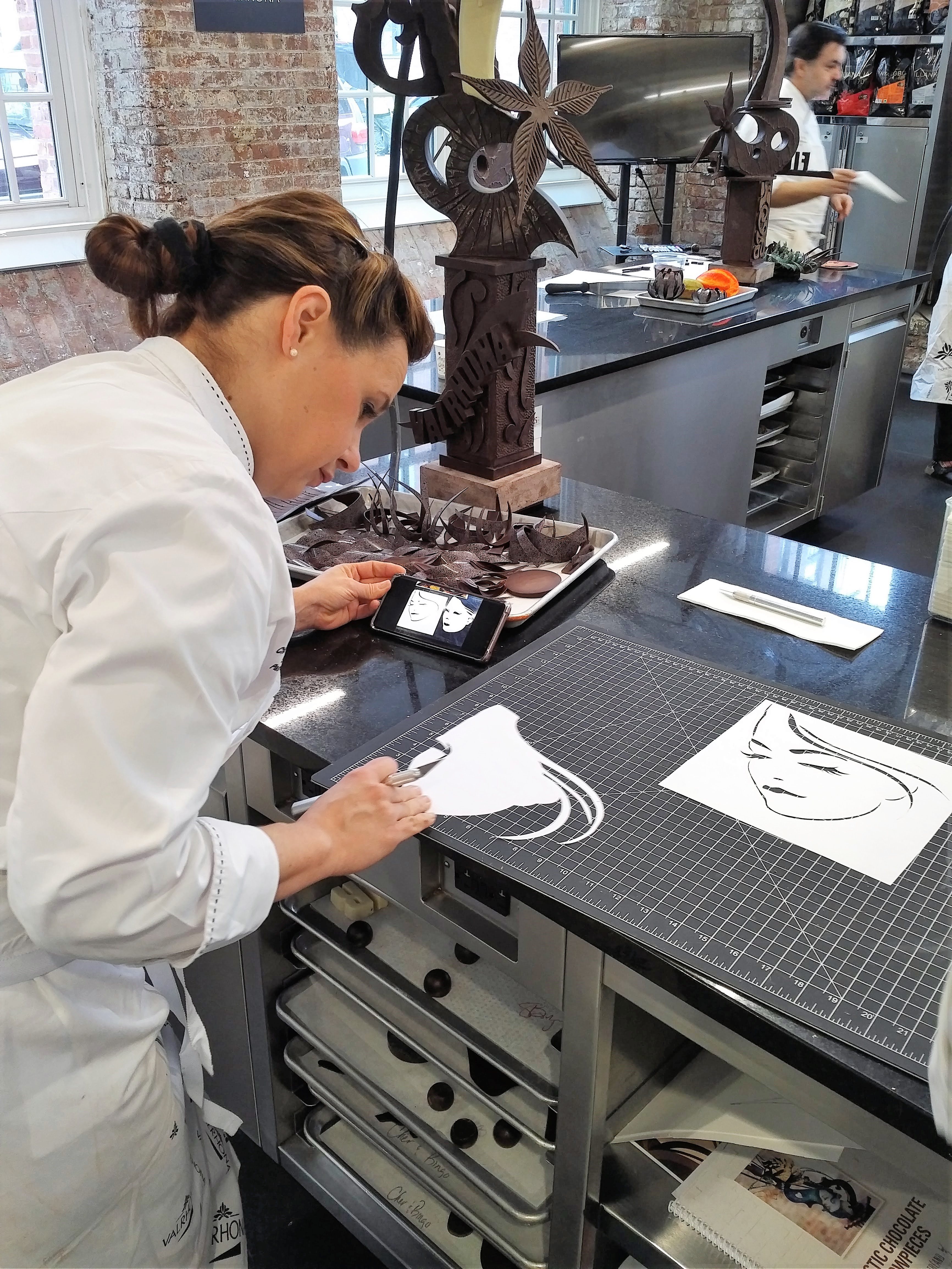 Chef Cher Harris is working on creating one of the chocolate elements for the future showpiece.

Also often people make one element, they feel good about it and they just place it right onto the showpiece. Or they would do only three elements  and they think that’s good enough. I always suggest, and for myself that’s what I normally do, I make 10-15 different elements, then I pick the best 3 or 4 among them. This way your final showpiece looks like a work of art, if you will, like haute couture. You can see the personality of the chef in it. But you have to be very strict with yourself and work on it, and come back and do it again, do it many times. Especially if you want to progress and grow, and create a better showpiece each time. That’s why when some chefs get satisfied with their work and always do the same thing, they can not achieve something more challenging, complicated. They can not move up. 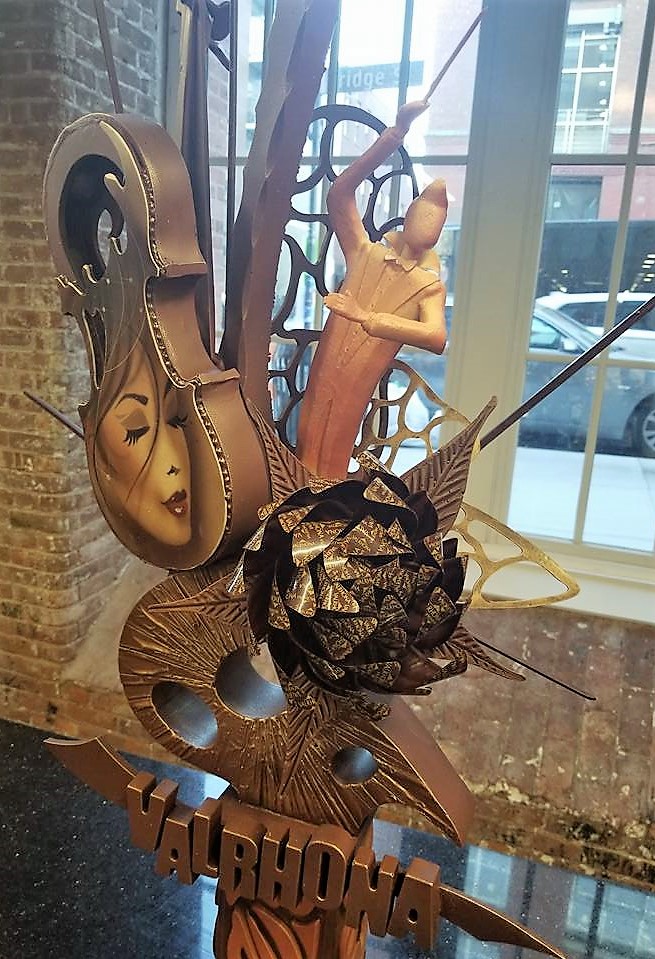