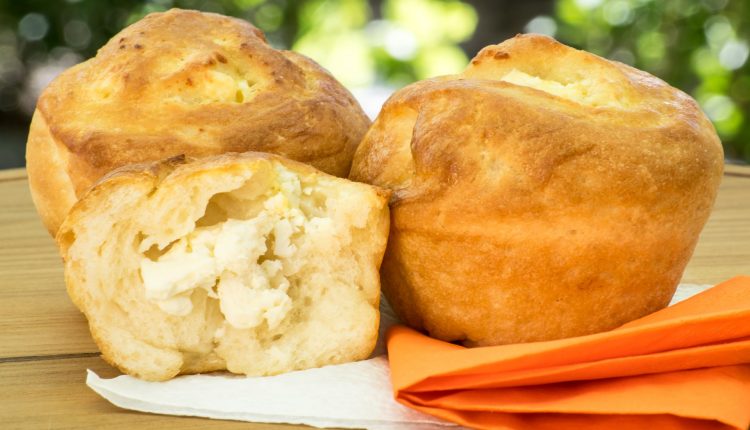 This popover recipe is originally from The Boston Cooking-School Cook Book (1896), written by Fannie Farmer.

A popover is akin to a tall muffin that, when baked, features a convenient space/hole on its underside, perfect for stuffing and filling. The filling could be sweet, for example your favorite jam, or savory–cream cheese, bacon and grated cheese, roasted veggies and more. In the photo above you see popovers filled with cream cheese.

This no-fail popover recipe comes from The Boston Cooking-School Cook Book (1896), written by Fannie Farmer. This book introduced the concept of standardized measurements in culinary arts and included notes on housekeeping and other kitchen basics. Upon publication, the publishing house in charge saw no prospect of profit from the book, and limited the printing to only 3000 books. Contrary to expectations, the book became a kitchen essential in no time and is still in publication over 100 years later.

Fannie Farmer started out by teaching in a cooking school, and after she had started her own academy, was invited to lecture in Harvard on nutrition and diet. Farmer believed strongly in the effect of food on the poor and sick, and thus she focused her attention and research in that direction. She published books and gave lectures at the Harvard Medical School, all in the hopes of helping those who were ill. She understood the importance of food, its appearance in its effect on helping the sick to get better and regain their strength faster.

Despite being in a wheelchair for the last seven years of her life, Farmer continued publishing works, making recipes, and giving lectures, she taught nurses and dietitians passionately and even ten before her death was still giving lectures to fully packed auditorium.

Mix salt and flour, and add milk gradually in order to obtain a smooth batter.

Add the egg, beaten until light, and butter into a bowl and beat for 2 minutes.

Pour into muffin or popover pan.

Bake for 30-35 min or until the tops are golden brown.

Pro Tip: Small round iron gem cups are the best to use for cooking popovers!

The texture of the popovers is much less sophisticated than that of their more elaborate pastry brethren, yet in spite of this simplicity, the taste is uncompromised. This feature makes them culinarily versatile and edible in any combination. Despite their compatibility with all sorts of stuffings, they are also well suited to be eaten plain, with a side of milk or juice perhaps, with no filling.